We’re already on Day 5 of the Meet Me Halfway book tour and I’ve hardly had a chance to write anything down and almost no access to wifi so I could post this. I’m sitting now in the cafe of the radio station KDHX in downtown St. Louis drinking coffee and riding their internet waves.

So far, I’ve done events in Madison, Milwaukee, and Chicago. It’s been kind of wild, learning how readings and book signings go, running from city to city, but I think I’m getting the hang of this.

My reading in St. Louis isn’t until tomorrow night (Tues., April 21, at Left Bank Books, at 7 p.m.) but we came into town a day early to do an interview on St. Louis Public Radio. With some time to spend before our St. Louis hosts get home to let us in the house, we went to Ferguson. I wanted to see the street memorial to Michael Brown, but when I googled it I was directed to a fresh news story about something that happened over the weekend. On Saturday, the Black Caucus of the American Library Association had planted a tree in Brown’s honor in the January-Wabash Memorial Park, a city park whose trees are all donated by friends and family of people who have died. On Sunday, someone chopped the tree in half and stole the stone marker with Brown’s name on it.

Keren and I went to the park. After wandering a while, looking for a tree which might no longer be there, we asked a couple park workers who were on break. They directed us to the only part of the park we hadn’t visited yet but once there it was easy to identify Bro 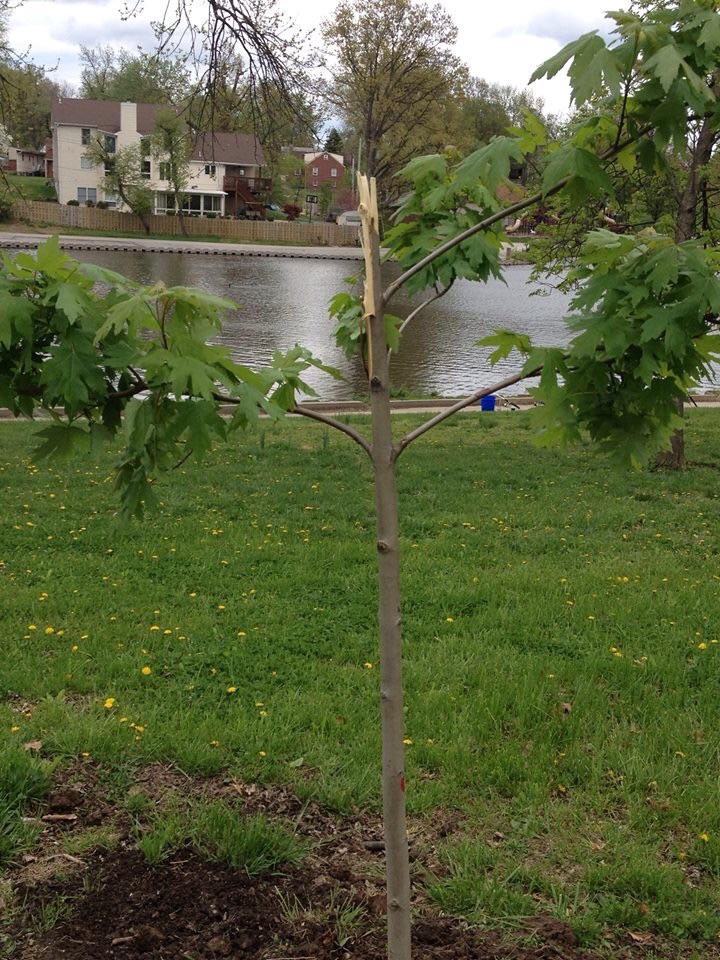 wn’s tree. It was a young tree with pale green leaves, its top hacked away.

I had wanted to go to Ferguson to feel how present the events of last August still were. The fate of the little tree is a clear answer.

We went then to Canfield Drive, to see the street memorial. The street is much smaller than it appeared to me on TV, with apartment buildings on either side. A narrow strip of road cones, crosses, flowers, and stuffed animals runs down the middle of the street. Another, much wider and higher pile of teddy bears rises up on the curb behind it. While we were there, a street sweeper was working its way down the street, slowing us to a funerary pace. Given that the street memorial has already been destroyed twice (once by arson and once by someone driving over it), my breath caught, thinking that the sweeper crew might be there to clear it away. But no.

The death of Mike Brown is still very present. The events that followed are scraped and burned into the landscape itself. So many buildings along Florissant Road have been demolished or are darkened by smoke or boarded up. Murals and graffiti line the street — “RIP Mike Mike,” “America Wake Up,” “Quik Trip — Class War,” and calls to love one another, to put God’s justice before humans’ anger, to remember the good things about Ferguson.

2 thoughts on “A tree grows in Ferguson”